Hacking Facebook with brute Force ☆Bruteforce attack on Facebook account script in Python apt update && apt upgrade apt install git apt install. Hack Facebook Account Password Using Brute Force First lets know something about Brute force attacks, “A brute by vampire How to Hack facebook Account by brute force in Kali Linux Tutorial. So for this hack we need some hacking tools – 1. New Python Script. I tried to brute force the 6 digit code on newyearinfo.site and was blocked after 10–12 invalid attempts. Then I looked out for the same issue. Today I will tell you about how to hack Facebook account using termux. For that we using bruteforce tool in termux. Installation command: ☆ pkg install git.

Oct 08,  · This simple script to penetrate accounts Facebook brute-force - newyearinfo.site This simple script to penetrate accounts Facebook brute-force - newyearinfo.site Skip to content. All gists Back to GitHub. Sign in Sign up -Any social media account hack-Android & iPhone Hack-Text message interception hack. Bruteforce Attack Hack is on Facebook. Join Facebook to connect with Bruteforce Attack Hack and others you may know. Facebook gives people the power . Aug 21,  · With this script, you can brute-force Facebook account and hack it provided the password exits in the dictionary you provided. Step 6: Have the patience to hack facebook with Bruteforce. You need to have a lot of patience for this hack to work, add some time delay between the attacks so that facebook will not block your IP. Jan 25,  · How to Brute Force hacking Facebook in Kali Linux. Hello friends today i will show you how to hack or get a password of facebook account how to brute force facebook with newyearinfo.site python script in kali linux or backtrack. A classic brute-force software which were made a decade ago and before can’t hack a Facebook account. Why? Because Facebook has pretty tight security system which protects their login page from these attacks by blocking attacker’s or user’s IP address if they failed to login three times in a row.

Brute Force hacking Facebook in Kali Linux. THEN [*] [email protected]:~# python newyearinfo.site Picture Account to crack: newyearinfo.site Prakash tried to brute force the 6-digit code on the Facebook beta pages in the '​Forgot Password' window and discovered that there is no limit. Command Lists To Hack Fb Accounts Using Multi brute Force attack Using Termux So Let's Start. Step By Step. First of All Download Termux. Passwords can be retrieved from these accounts to hack fb online on request. Brute Force Attack. The most common and most. In this tutorial, we will hack a facebook account with a tool named Social-box using a brute-force attack. you must have heard about this.

From time and time, when we are to hack a facebook account, we have an idea about the password of the victim through other hacking techniques and research, we employe the brute force method. It involves sending queries to Facebook servers at a very high speed. Once the correct password is entered, the FB account is hacked and we are given access. By the way, Faitagram stands for Fa(cebook)(tw)it(ter)(inst)agram. To clone the script, what you need to type in the terminal is: > git clone newyearinfo.site 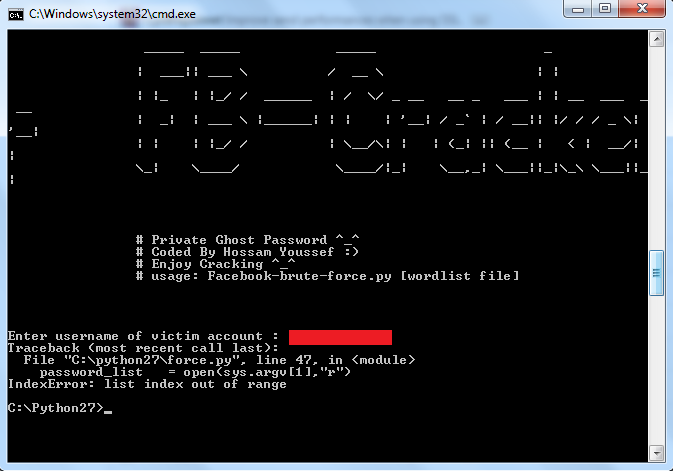 Understanding the password-cracking techniques hackers use to blow your online accounts wide open is a great way to ensure it never happens to you. You will. Posts: 3. December 11, am. Can anybody tell me, It's possible to hack Facebook account password using brute force attack? Quote. All forum topics. Résultat de recherche d'images pour "hack facebook with kali linux". In a brute force attack, automated software is used to generate a large. Brute force attack– This method is similar to the dictionary attack. Brute This information can be found on company websites, social media such as facebook, twitter, etc. It is used to recover passwords for user accounts, recovery of Microsoft Access passwords; networking Hacking Activity: Hack Now! Python to hack facebook accout via bruteforce. fork. loading. share. new repl. talk. Sign up. No File Open. W. Fetching token. Loading ?